UPDATE: Attendance at Friday services is limited due to COVID-19. Click the Livestream & In-Person Services link below to register to attend or watch our livestream Fridays at 10:45am on www.eccad.org/live. Join our ECC WhatsApp broadcast to get the latest news. +971508346143 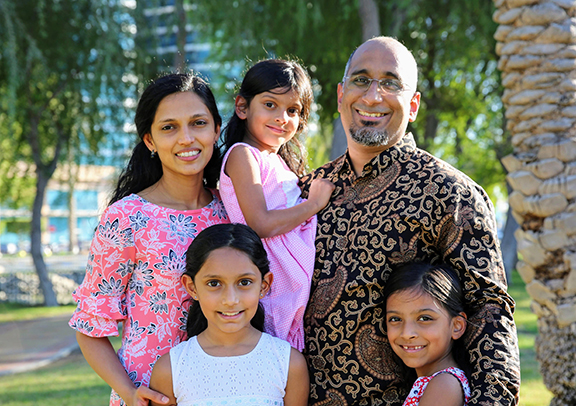 Very soon after my salvation, I sensed that the Lord was calling me to serve Him in ministry, but I was not sure of what this entailed. Being a musician, I initially thought that I would serve the Lord through music and worship ministry. I had just graduated from college and was encouraged by my parents and my church at the time to take a job offer with Infosys Technologies, a top Indian IT company and learn life in the corporate world before pursuing vocational ministry. So in late 2005, I joined Infosys Technologies Limited in their Mysore campus. While in Mysore, I was involved in a workplace Bible study group. This group began growing very rapidly, and I soon emerged as a leader of the group. I found that God had blessed me with an ability to study and explain the truths of His Word to others. I led the effort to plant a church in Mysore out of our group, and also helped launch similar groups in other Infosys campuses in India. These experiences provided the initial signs that the Lord was calling me to serve Him in ministry.

But the Lord had further ways to prepare me. I married my wife Nishika in 2008, and we moved to Toronto, Canada, where Infosys transferred me to work. For two years in Toronto, I continued in bi-vocational ministry, leading worship at a small church plant while working full-time in the software division of a large financial services company.

By God’s grace, I experienced great success at work in Toronto and was living the “Indian dream”—a flourishing software career in North America. After a couple of years, however, God’s call became increasingly clear and irresistible. I felt a growing hunger to serve God more fully and to be further equipped to rightly handle the Word of Truth (2 Tim 2:15). I was especially influenced by the online preaching ministry of John Piper and his call to live radically and take risks for Christ. Finally, in 2010, following God’s call, I quit my job, and my wife and I moved to Louisville, Kentucky for me to attend Southern Seminary, with plans to serve God in whatever He might call us.

While at seminary, the Lord continually affirmed my calling through service in my local church, Immanuel Baptist Church; through various preaching and teaching opportunities; and through awards from the Seminary for both preaching and biblical studies. My professors and local church pastors encouraged me to pursue a PhD to sharpen my giftings and to be further equipped to serve the global church.

However, while the Lord greatly blessed my studies and academic ministry, my heart remained tied to pastoral ministry in the local church. I served at my church in Kentucky in a variety of capacities, including as a pastoral apprentice and as an elder. I spent a number of years wrestling between the call to a more academic ministry and the call to pastoral ministry. Although by God’s grace I was flourishing in academics, through serving as an elder in my local church, I began feeling an irrepressible sense of calling to the pastorate, particularly to care for Christ’s sheep through preaching God’s Word.

I was doing my doctoral studies and teaching in the Bible college setting when I had to perform my first funeral—that of an infant who was born alive and died in the arms of a couple I had loved dearly and whose wedding I had officiated. Our whole church attended and as I ascended to the pulpit to preach that day, tears streaming from my eyes, my heart was filled with a burning sense of calling: “This is what it’s all for; this is what all the study of the Bible and theology is for—to comfort the beloved saints of Christ with the word of God.” That very day, as I sat in my apartment after the funeral, I resolved in my heart to pursue pastoral ministry, specifically as the primary preaching pastor in a church. This calling has been repeatedly confirmed by my local church elders with whom I served and by all the friends, colleagues, and mentors who have known me and served with me over the years.